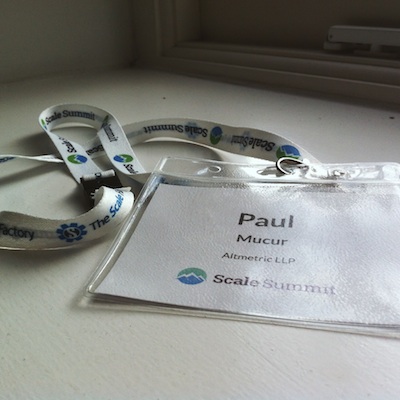 Yesterday, I attended Scale Summit: “a performance and scalability unconference” using the Open Space Technology format. Scale Summit is the successor to Scale Camp, an event organised by Michæl Brunton-Spall and previously held at The Guardian offices. Having attended Scale Camp in late 2012 and considering it to be one of the most rewarding experiences of my career, it was without hesitation that I signed up for its follow-up.

The quality of Scale Camp and Scale Summit is almost entirely dependent on the attendees: the unconference format and Chatham House Rule mean that people are free to run open discussions and Fishbowls and speak a little more freely than they might elsewhere. For example, my highlight of 2012’s Scale Camp was discussing continuous delivery with people I would consider experts and even pioneers of that practice.

As Scale Summit is multi-track, I could not participate in all sessions but thankfully other attendees such as Philip Potter, Matthew Cottingham and Zac Stevens have also written up their notes.

My first session of the day was an open discussion on real-time monitoring and the collection (and retention) of large amounts of metrics.

There was a general consensus that everyone is using Graphite though Grafana piqued interest as an alternative dashboard and Carbonate suggested for rebalancing clusters.

There seemed to be a lot of people using Sensu for monitoring (as well as the usual crowd of Zenoss, Ganglia and Nagios users) though some (including myself) have been experimenting with Riemann, particularly for its ability to alert on event expiry. We currently use this at my day job to detect when an integration with an external service has started misbehaving as we can reasonably expect new data in a certain time period (e.g. a tweet every 10 minutes). Upon discussing this, it occurred to me that I could use this expiry technique a lot more than I currently do as a very simple way of flagging anomalies.

While discussing the resolution of metrics (e.g. every second, every 5 seconds, etc.), an interesting question was asked:

When investigating an outage, has anyone ever had too much data?

It seems that collecting the right data is still difficult to predict so the sensible approach seems to be measuring everything. The cost of doing so (particularly those wanting high resolution or retention of data) can be high with one individual’s monitoring server having “more cores than my entire [server] farm”.

Aside from collectd, there was some discussion around using Diamond to collect metrics largely due to it being written in Python for companies already using the programming language for their applications.

Microservices in the Real World

During the day’s introductions, quite a few people mentioned Microservices which I had heard little about so I decided to take part in an extremely fast-paced Fishbowl discussion on the topic.

There was some disagreement on the exact definition of a microservice and some took issue with Martin Fowler’s insistence on HTTP as a transport or purely using lines of code as a defining factor. The loose definition seemed to be modelling applications as a collection of simple services responsible for a single piece of functionality (e.g. translating place names). In this regard, it seems remarkably similar to service-oriented architecture (SOA) but with an emphasis on smaller services.

Many benefits were cited in terms of reducing complexity, affording diversity of technologies and the ability for teams of one or two people to hold entire services in their head (something that becomes unfeasible over time for monolithic systems).

The importance of consistent practice was said to be paramount: consistent documentation, clear ownership and predictable interfaces were all discussed. One intriguing practice mentioned was that of having a standardised endpoint that revealed the owner and current health of a system (with some parallels being drawn to a humans.txt). Even if ownership and responsibility for a service is unclear, the size and simplicity of such systems might make them easier to maintain.

While the benefits seemed appealing, I was more than a little concerned about the effects this would have on teams and technology organisations as a whole. One problem I have seen repeatedly across companies is that of information siloes: where team members become segregated and shared knowledge of systems is largely absent. I fear this model of many small services would encourage siloes but the difficult question is whether this is a bad thing: perhaps it is better for small teams to move fast at the cost of shared understanding? If the benefits are to believed then services might be small and simple enough to alleviate the dreaded Bus factor.

As an extreme example of this culture, the practice of allowing competing services was touched upon: where teams can freely develop another version of a service without collaboration and let client applications decide which they prefer. The implications this environment would have on teams (where people could simply supplant your work and openly duplicate effort) makes me more than a little apprehensive.

I remain sceptical but it has encouraged me to consider pursuing SOA more aggressively particularly considering success stories such as Songkick’s.

This discussion began with the problem of increasing awareness of infrastructure within an organisation to help reduce the divide between developers and operations but meandered around general visibility of infrastructure for various stakeholders.

It was agreed that the problem with documentation is that it is almost always out of date and there is little incentive to keep it updated. After some suggestions of automatically deriving architectural diagrams from infrastructure (using firewall rules to infer traffic between services or the likes of Zipkin), it was clear that human intervention is required. It was suggested that diagramming the high level, logical flow of a system might last longer than any including exact implementation details (the ultimate, eternally correct diagram being a single circle with the word “System” in it).

After a slightly alarming diversion into the world of Promise Theory, there was a discussion about tools for describing the relationships between services beyond what is currently offered by the likes of Puppet and Chef with Ubuntu Juju suggested as a possible option.

When discussing the problem of service discovery, one architectural practice that caught my attention was that of running HAProxy on all servers and having applications talk to localhost with the load balancer configuration determining where services currently reside. A few people seemed to be using this pattern (and some cited Airbnb’s Synapse) though the difficulty of debugging network traffic and managing health checks coming from every server were mentioned as downsides.

The discussion of this topic was obviously a little more sensitive than most but the general recommendations were to use a content delivery network such as Fastly to immediate drop all attacks below Layer 7 and use services such as Prolexic and intrusion detection systems such as Snort.

Ultimately, the most sophisticated attacks are extremely difficult to distinguish from normal user behaviour though these are fortunately rare with most attacks being easy to detect. That said, there seemed to be no fully automated way to deal with an attack and human intervention is currently required.

The last and most popular session I attended was that on Linux containers with Docker being the impetus but LXC and Solaris Zones also being discussed.

The current best practice seemed to be using a container to run a single process (e.g. one container for nginx and one for php-fpm) though it wasn’t explored what benefits this gives.

One appealing use of containers seemed to be encouraging the Immutable Server pattern where persistent data is separated from application servers and configuration management is eschewed in favour of disposable instances: e.g. if you want to upgrade a package, simply build a new container with the change, spin it up and kill the old instances (this reminded me of Adrian Holovaty’s move to AWS from Heroku).

There was a brief discussion on service discovery in the face of many containers with some success using Hipache instead of using the HAProxy/Synapse approach mentioned in the earlier “Visibility of Infrastructure” session. For further production use, Mesos and Marathon seemed to be the technologies to watch.

In general, everyone seemed quite excited about the potential of containers but it is still very young with little tooling available. At the very least, it made me want to join the cabal of people toying with Docker in my spare time.

In general, there was a strong theme of small, composable services (perhaps in containers) and a particularly impressive demonstration of deploying an application server in minutes to something resembling a private Heroku by using Dokku.

As with the last Scale Camp, it did feel like absolutely everyone is using AWS though there were some, like myself, with a mix of hosting providers. Amongst those not entirely in the cloud, there was some fondness for OpenStack.

Besides the aforementioned renewed vigor to pursue SOA, I was convinced by a discussion between sessions to make better use of DNS as a means of service discovery: e.g. instead of specifying the location of your MySQL cluster by managing configuration files with Chef, simply hardcode the location as mysql.service and then use an internal DNS server to resolve that as needed (even allowing for test environments to resolve to a different location). This separation of service location from application configuration seems obvious but I have long coupled such things in the past and used configuration management to work around it.

If you are at all interested in any of the above or just want to sit in a room and hear tales of scaling woe, I heartily recommend attending the next Scale Summit.